WHAT ARE THE BEST COUNTRIES FOR IT PROFESSIONALS? 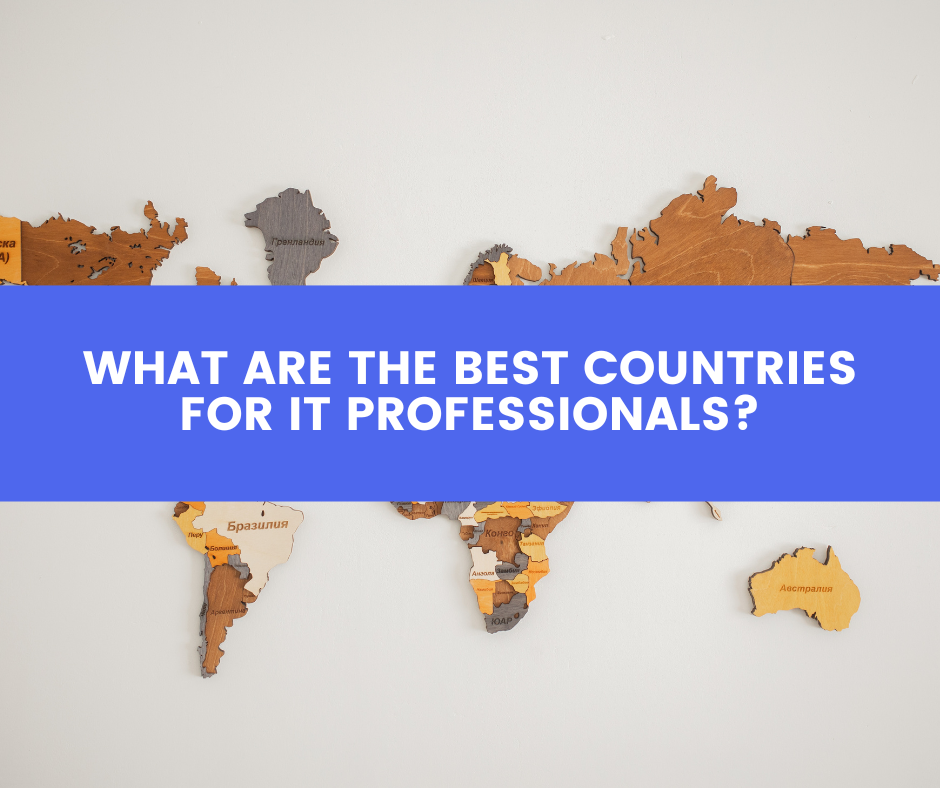 Migrating to another country is not an easy decision. It's a long-term adventure with far-reaching consequences. Nevertheless, many professionals (IT specialists are not an exception) are looking to move to a more stable, progressive and socially protected environment. Many people are also looking for better career opportunities and a higher standard of living. But not all the developed countries can be considered immigration friendly. Let’s look at the list of the most attractive countries for IT professionals now.

TOP 10 BEST COUNTRIES FOR IT PEOPLE

The cradle of the tech giants hosting headquarters of all the FAANG (Facebook, Apple, Amazon, Netflix, Google) gang. Actually, being a tech giant there are only two countries where you can be based now: USA and China. But considering the specifics of working in China (political restrictions, different mentality, etc.) the United States of America is the best choice for IT expats. Competition is huge, as well as opportunities for qualified and ambitious professionals in the field of entrepreneurship and career. To cut a long story short, migrating to the USA is one of the best choices so far.

The second most popular option after the USA. Expats love Canada for its openness to foreigners: more than a fifth of the population are from another countries. Canada boasts one of the highest incomes per person in the world. Canada IT industry is well established, all roundly developed and has similar technological ecosystem to USA. So, if for some reason America is not for you – Canada can be a great plan B. Immigration process is straightforward and easy to implement. One more thing to consider is the climate. Northern regions of Canada are quite cold.

UK tech industry in a big eco system. There will be a place for both: young aspiring IT professionals and expert level specialists with specialized skills. Despite big cities being rather expensive to live in and the recent trend of limitations that the government applied in the immigration sphere, the UK is still one of the top countries for IT people.

Did you know that Australia is one of the most expensive countries to live on the planet now? The flip side of the coin are the salaries and prospects for working in the IT industry. Australia is known for a high appreciating of qualified specialists. Permanent residence procedures are manageable and easy to handle. And if you like animals and nature in general, you will love Australia as its flora and fauna are extraordinarily fascinating.

While being not the obvious choice, France is a country of a certain spirit where inventors, pioneers, and entrepreneurs feel at home. There are great prospects for IT specialists as well. The downside of immigration procedure is that French can be quite conservative when it comes to their language. They will give preference to immigrants from French-speaking countries. Nevertheless, if you are an expert that can contribute to technical development and prosperity of France, your weak French won’t be a problem. Moving to France can be also a good idea if you a fan of their culture, fashion or food.

Lowest unemployment figures and the strongest economy in the EU are some good reasons to think of migration to Germany. German tech industry is another reason to bear in mind. It is considered as one of the most innovative and fourth largest in the world. With their aging population (a common problem throughout Europe) young IT professionals able to fill the gaps in modern skills will be more than welcomed.

Another good news is that you're not obliged to learn German to work in Germany. English is the business language.

Fantastic, innovative Singapore is one of the most developed countries in Asia. Singapore’s IT sphere is developed and offers plenty of opportunities for foreign professionals. It is a very small and safe country with some peculiarities. Security cameras are literally everywhere, so you’ll have to watch your behavior.

If you like Mediterranean region, Spain might be a great opportunity. There is a noticeable shortage of well-trained and experienced IT professionals. Chances that you will find a good position are quite high.  But there are some challenges as well. Unlike Germany, in order to work in Spain, you'll need to learn Spanish as many IT tasks require that.

If you still don’t know how to ride a bicycle and want to learn it, start planning your migration to Netherlands. They have more bicycles than people. Perfect strategy for cleaner environment, isn’t it?

Jokes aside Netherland is considered as one of the most innovative countries in the world.  Netherland’s tech companies are normally among the best in their niches. Their advanced positioning is a perfect background for progressive solutions and innovations. Another bonus is that they speak English at work.

You’ve probably heard of high crime rates in South Africa.  But did you know that it is the most promising destination for IT professionals in the region? South Africa tech industry is well developed and multi-facetted. Their home IT companies are normally spread across Africa, Europe, and the Middle East. Recently there have been a few mergers and acquisitions, but the industry is still open with many opportunities for IT professionals.

Whether you are a young professional or a well-seasoned IT expert, exploring the possibility of future migration to another country, there are plenty of choices all over the world for you to consider. But before such a serious step you need to balance your resources and expectations.

Do you like a warmer climate or colder one is ok for you? Are you ready to learn a new language? How far from your home country are you ready to settle? These are some basic questions you need to figure out for yourself. And last, but certainly not least. Be sure that you like the country you're going to live and work in.
CONTACT US
Interested in growing your business? Write to us!
feedback@rewtechnology.com
REW is the partner of choice for many of the world's leading enterprises, SMEs and technology challengers. We help businesses elevate their value through custom software development, product design, QA and consultancy services.
About Us
Industries & Expertise
Career
+1 727 300 2347
contacts@rewtechnology.com
Florida