FIRST PROGRAMMERS IN HISTORY: HOW IT STARTED 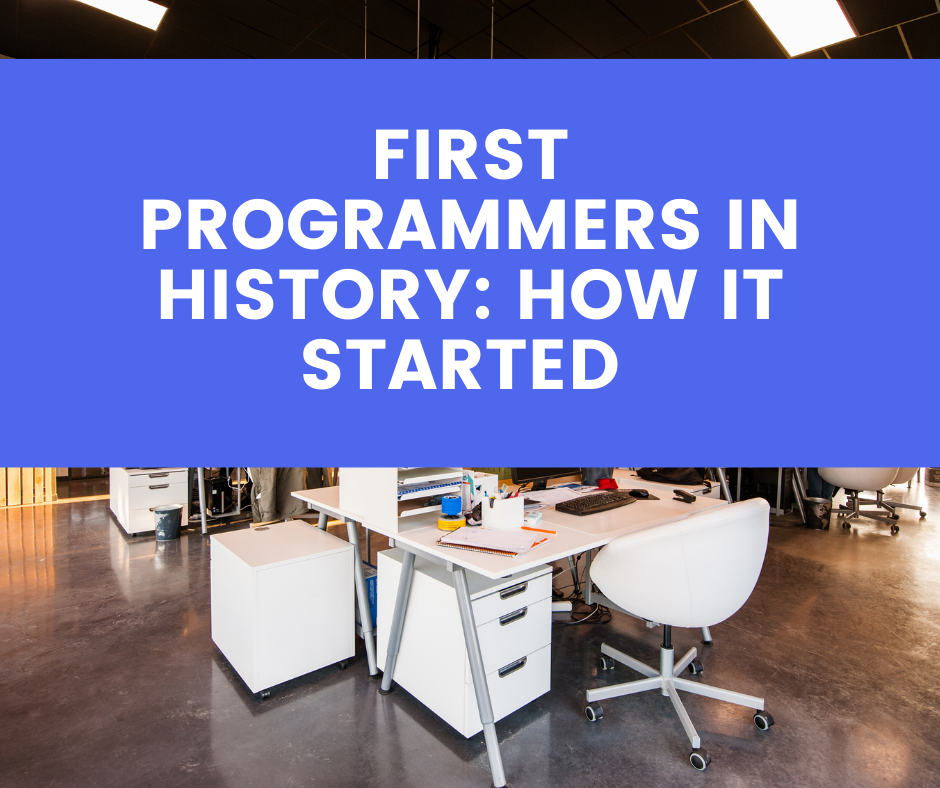 SO, WHO WAS THE FIRST PROGRAMMER?

The first known examples of computers were clockwork devices. The earliest is the Antikythera mechanism (200 BC – 70 BC).

It was an ancient Greek hand-powered orrery, used to predict astronomical positions and eclipses decades in advance. It was also used to track the four-year cycle of the ancient Olympic Games.

For obvious reason, we don´t know the names of its operators. So, the first programmers remain unknown.

THE FIRST BINARY SYSTEM AND THE BIRTH OF PROGRAMMING

It is considered that Jacquard Loom (1804), was the first known binary system. The loom´s punch card system made it possible to automate the process of weaving different patterns into fabric. The idea was simple: a number of punched cards were inserted into the loom. If there was a hole in the card, the needle rose, if there was no hole, the needle stayed down.

WHO WAS THE FIRST COMPUTER PROGRAMMER?

1840s. Here comes the first ever female programmer – Ada Lovelace. She is known for designing programs for Analytical Engine, a computer that wasn’t ever produced.

On June 5, 1833, Lovelace (aged 17) met a computer pioneer, Charles Babbage (aged 40) at a party in London. The two began an unusual friendship.

It was the first time someone suggested that a computer is more than just a calculator.

Time to mention the father of theoretical computer science himself: Alan Turing.

In 1936, before any of somewhat capable computers even appeared, Turing (aged 23) wrote a paper, defining the way we think about programming today: “On Computable Numbers, with an Application to the Entscheidungsproblem“.

He is famous for developing some early computers during WW2 helping to crack German enigma code and finish war at least 3 years earlier. Like many early computer pioneers, he was backlashed, struggling to prove the importance of his work. Moreover, his life tragically ended at 41. There are speculations that due to stigma for his homosexuality, he committed suicide.

THE FIRST PROGRAMMER ON AN ELECTRICAL COMPUTER

Konrad Zuse is a person who invented the world’s first working electromechanical, fully automatic digital computer. He called it Z3. It was 1941 and Zuse was Alan Turing´s antagonist working on a German side. Z3 was fed with a strip of film. Somewhat like the Jacquard Loom system, the film was punched with holes. These were an example of early programs.

1952. American computer scientist, Grace Hopper (she/her), developed an algorithm converting English into code. This system was later transformed into COBOL, a computer language still used today for data processing. COBOL was used by the UNIVAC I (one of the first large-scale electronic computers).

THE FUTURE OF COMPUTER PROGRAMMING

With so many women playing a role of programming pioneers, it’s fascinating that as of 2020 only 8% of software engineers were women. However, we can see a lot of young women starting to display an interest in information technology. And, as we know that history repeats, this statistic might one day change.