WHAT ARE THE QUIRKIEST TECH JOBS NOW? 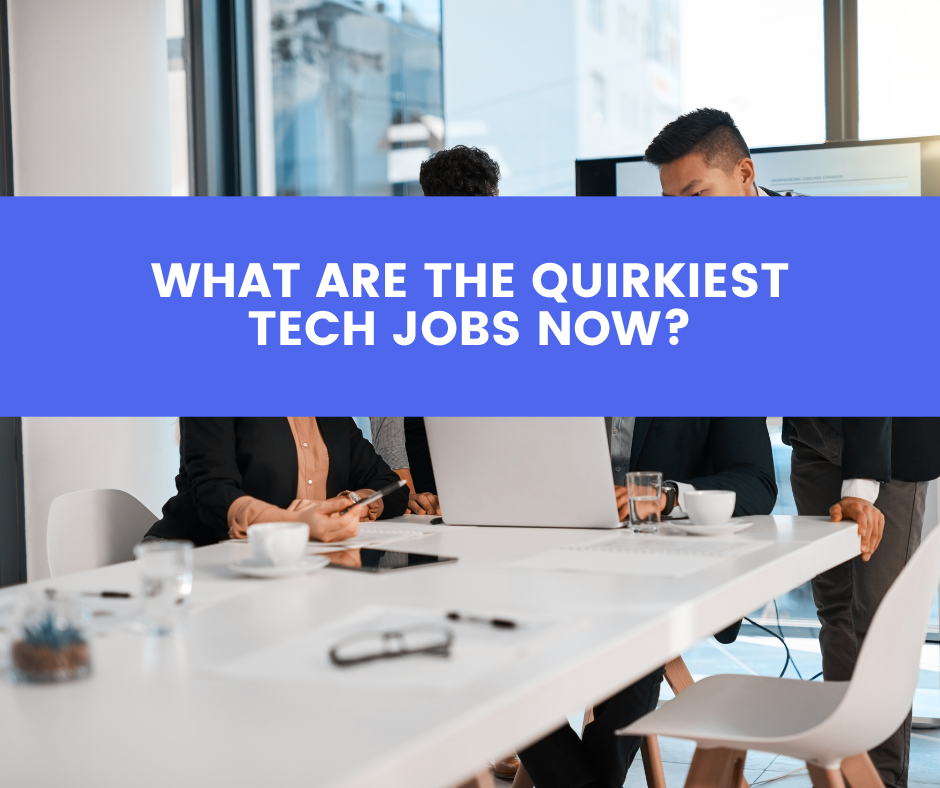 Who do you want to be when you grow up? There were days when we would hear some typical answers from kids about their future jobs: a cop, a doctor, an astronaut.

But those days apparently have passed. The new dream job list has been reshaped by some new careers popping up lately. And with the Information Technology rapid growth and development many new doors have opened in that field. Some of these tech-related jobs sound weird to our ears but are actually quite interesting. Wanna know more about some quirky IT jobs? Let’s dive in.

Our cities are getting more and more digitalized. As you might have understood, the person possessing the Cyber City Analyst position is responsible for the data exchange and cyber security of a city. Cyber city analysts' main job is to keep track of all the digital activities happening in the city network.  Preventing financial theft, hacking, copyright infringement – are just a few positions from his or her everyday to-do list.

Actually, Cyber city analyst is like the sheriff of the city dealing with the bad guys, except for most of this is done digitally, sitting behind the computer.

We all laugh at the hilarious memes on the internet. But have you ever thought that someone is getting paid to produce those funny memes? Meme agents are known for making some anonymous people incredibly famous.  A lot of memes that we see are based on television series, books, movies and other content as well. Would you hire a Meme Agent to make you successfully famous overnight? Sounds pretty cool, right?

Like playing games? Well, this can be your career! It is a dream job for people being accused of constantly playing games and having vast expertise in this field. Maybe you are the perfect fit for this job? As is clear from the title you will be testing new games by playing them like an ordinary user. And get paid for that. Quite a mind-blowing career! As you grow to the pro gamers level you might even be able to work with game designers on some new game features that you can refer to as: "It was my idea”.

You have probably seen people on the internet, showing how to increase your phone battery life or how to fold t-shirts in the most compact way. These are some mundane lifehacks that help us in our everyday life. But now big companies are hiring people to hack their commercial growth. Professional growth hackers will tell how to boost your business expansion and increase revenue. They work on modernizing companies through innovations, eliminating obstacles and raising productivity. It would be interesting to hear their job description in detail, but most of them are classified.

There are hackers and there are... ethical hackers. They will tear your code apart, but for a good reason. Their main job is to proactively detect flaws and vulnerabilities of your network to help protect your company from hackers. The bad ones, trying to steal your information or hijack your systems. Ethical Hackers normally work with government or private computer systems being their front-line defense in cyber security battles. IT degree with Cybersecurity Certification is a usual mandatory for this position.

Data Modeler creates data models and establishes connections between data fields to ensure a company's data systems maximal efficiency. His or her responsibility is also to present the system to end users and train them how to use it. A degree in computer science or math with Data Management Certification are normally required. As there are not so many specific Data Modeler certification institutions, in-house training while on the job is also acceptable.

The person on this job normally investigates how computers or other electronic devices (such as phones and tablets) were exploited in committing crimes. IT degree with Forensic Computer Examiner or Ethical Hacking Certification is required.

Game developers for consoles like PlayStation, Xbox or Nintendo invite Combat Designers to create characters, combat scenarios or particular fighting scenes for the combat-style video games that so many of us love to play. A degree in computer science and Video Game Design certification are required. As few or none are specifically offered in Combat Design field, specialists with relevant experience are highly sought-after.

This is an actual job title at AOL company held by David Shing, known as something of a futurist, from 2007 to 2019. As he described his duties: “he listened to where media was headed and figured out how AOL brands could win in that environment”. But what did he do, you ask? Well, think flying to conferences all over the world and preparing keynote presentations. Plus, some top managers at AOL simply called him a “muse”.

With the rapid development of AI, IoT and Information Technology in general, many new doors have been opening for people looking to find themselves on the career side.

Yes, some of these job titles we couldn’t even imagine before, but now as we are building our future society, it’s a great idea to embrace these technological changes and welcome them into our life.