WHAT IS THE MOST OUTDATED TECHNOLOGY STILL USED TODAY? 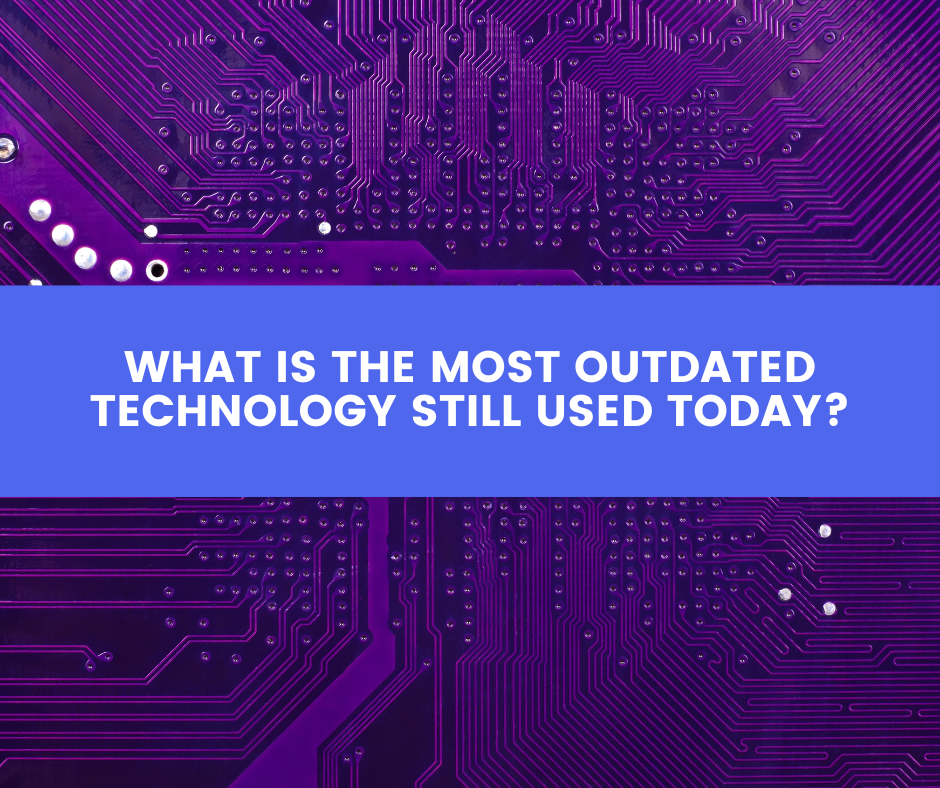 They say fashion is cyclical. Great news for those with a lack of taste and motivation to update their style. Just imagine, instead of ditching old clothes and moving on with a new wardrobe, you can simply wait and... boom! Soon or a later – you will look on point. Again.  Fortunately, this doesn’t work the same way with technology. And while there is a good chance that oversized clothing from the 90’s will make you look cool; technology does not follow this trend. People love the newest tech and quickly forget about the old one. Huge lines outside of Apple stores when a new iPhone drops, is the best proof.

But is technology that linear or maybe there are still few exceptions, when old tech is still in favor? Let’s look at the most outdated technology still used today. You will be surprised!

Believe it or not, floppies are still used in ATM machines, aviation industry, medical equipment and as a back-up for computers running on MS-DOS. If you ask why – we have three words for you. Reliability against viruses.

Floppy disk drive was invented in 1967 by IBM specialist Alan Shugart. First it was 8-inch and since 1981, it was upgraded to a 5.25-inch and used on the first IBM PC. Their informal name “floppies” came out due to the flexible plastic envelope that protected disks against dust.

The peak year for “floppies” was 1996, when there was estimated to be around five billion floppy disks in active circulation. A few years later the introduction of CD-ROMs, DVDs, USB flash drives, and online storage simply left no chance for this technology.

Nevertheless, according to the United States Government statement in 2016, old IBM Series/1 minicomputers are still in use to coordinate the United States Air force and its nuclear assets. Guess what disks do they run on?

Preferred by connoisseurs for their high-quality resolution, they are still used in communications, medical testing, and as an industrial heating solution. You actually might have one at home, as statistically 46% of households still have at least one CRT device.

Simply put, the Cathode Ray Tube is a vacuum tube. The screen made of such tubes produces visible light when it is hit by electrons. Cathode Ray Tube was invented by the scientist Karl Ferdinand Braun in 1897 in Germany.

Back in 1966, Sony first released CRT Television offering colors, brightness and contrast never seen before. Nevertheless, with the emergence of LCDs and flat-screen televisions, CRTs fame began to fade. Customers seem to prefer visual experience and clarity of the newest tech.

Despite CRT technology being near dead in the consumer segment, it is still used in medical imaging, industrial heating solutions, and... on competitions for professional arcade gamers.

COBOL is the oldest programming language in use now. Mainly, it facilitates legacy applications on mainframe computers, and is used for large-scale batch, and transaction-processing jobs. Even today 70% of global business transactions are powered by COBOL.

Common Business-Oriented Language (COBOL) is a programming language that is normally run on the mainframe and personal computers for business and administrative purposes. After years of dominance came the 1980s when many small businesses migrated from COBOL mainframes to PCs. In the 1990s, COBOL was already considered outdated with most of the businesses switching to newer technologies.

COBOL programming language is still popular in specific government and business-data areas due to its stability in maintaining legacy systems. It's holding on quite well, for decades enabling millions of banking operations every day with its programs.

Still in favor of rural Americans with no access to high-speed Internet, AOL (America Online) is a cheaper and more reliable alternative to the latter. The AOL services (which is basically dial-up internet) are subscribed by around 2.1 million people every year.

In 1993, AOL boomed acquiring its own email addresses used by people to enter the Internet. By 2000, AOL became America’s biggest Internet provider with a net worth of $125 billion and client base of 34 million people. Nothing could stop them.

However, in 2002, slowly reacting to changes result, brand was outplayed by broadband services and such ambitious players as Google.

In 2015 AOL was bought by Verizon and ever since continues to make limited revenue off its dial-up services popular among rural Americans.

Many business companies and public organizations still use Windows XP tied to custom software that is not supported by later versions of the OS. Reportedly there are still around 28% of the Windows XP shares in many countries.

Microsoft created and launched Windows XP as a personal computer operating system on October 25, 2001. Soon after the release, XP dominated the whole industry by running on around 90% of computers. With the remaining 10% shared by Linux and Mac.

XP was popular for its GUI, virtual memory, multitasking, and utility support, being often installed on servers and mobile phones. As of January 2019, there are only 2% of Windows PCs still having Windows XP.

Despite no support for Windows XP (Microsoft terminated it in 2014), it is still preferred by many fans claiming that its UI is easier than in newer versions. Moreover, Windows XP shows great performance on machines with a lower memory configuration. Who needs a costly upgrade in this situation?

While most people and organizations prefer the newest tech available, there are still many examples of successful exploitation of older technologies.

Let’s face it: not everyone was born innovators. The logic of traditional attitude is simple: ‘if it’s still working, why change it?’. Not to mention that the cost of migration to newer tech can be unacceptably high.

Of course, every coin has two sides and the consequences of using outdated technology can be devastating for organizations. But that’s the beginning of another story.