MOST POPULAR PROGRAMMING LANGUAGES: WHAT ARE THEY FOR? 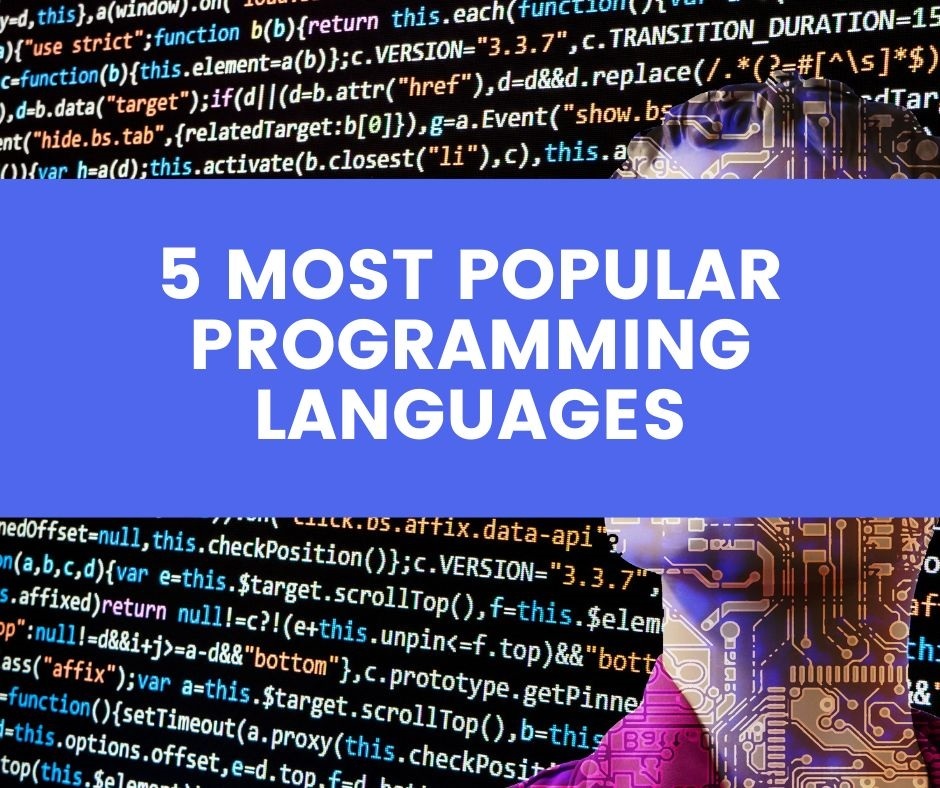 First of all, let’s talk about a programming language.

At a very basic level it’s a set of commands telling computers how to perform different tasks. Thanks to global digitalization, programming languages play a key role in peoples’ life everyday all over the world.

So, what programming languages are the most popular, widely-used and therefore highly desirable for job seekers in their search for employment?

In September 1995, a Netscape programmer called Brandan Eich developed a new scripting language in just 10 days. It was originally named Mocha, but quickly became known as LiveScript and, later, JavaScript. It is now used to build 95.2% (1.52 billion) of websites, including Facebook, YouTube and some very popular web apps such as Google Maps and eBay.

WHAT IS JAVASCRIPT USED FOR?

When you click a button on a website, a side panel slides out. That’s JavaScript at work.

Now, with the rise of frameworks like React Native and Ionic, you can use JavaScript to create apps for both Android and iOS.

Oculus Rift and Valve Index are now becoming more accessible. JavaScript is a perfect language to create applications for both of them.

Short for HyperText Markup language, it is a markup rather than coding. Most web pages and applications use it to define the text and body of the layout. HTML was developed and written by Sir Tim Berners-Lee, the men, who invented the world wide web in 1989.

WHAT IS HTML USED FOR?

Thanks to HTML tags and elements, we can define the headings, paragraphs, and other contents of a web page.

Imagine having to manually enter the URL of every web page you wanted to visit. This would be our reality without HTML anchor tags.

HTML also allows you to not only embed images into a webpage but also adjust their width, height, position, and even the way they're rendered. Also, you can embed videos will all its controls.

HTML5 also improved the language's offline capabilities. Websites use cookies to store data about users that can be retrieved later when they revisit the site.

It was initially designed by Guido van Rossum in 1991 and developed by Python Software Foundation. Developed with an emphasis on code readability, its syntax lets engineers squeeze concepts in fewer lines of code.

WHAT IS PYTHON USED FOR?

Python's simple syntax and extensive selection of third-party libraries make it a great choice for anyone considering a career in data science.

Python runs in the server of web applications and interacts with databases and APIs after a user requests data from the app's front-end in the browser.

Many Linux and open-source desktop applications use Python. Plus, with GUI libraries like Tk, wxWidgets, and Qt, you can use Python to build cross-platform applications that run on Windows, Mac, or Linux.

Early 1970s. An IBM research guy named Dr. E. F. Codd pioneered to work with data storage and search. IBM liked what he did, so they funded a project called System/R to build a prototype based on Codd’s research. Later on it was called SQL.

WHAT IS SQL USED FOR?

SQL can be used to easily search for either single instances of data or for data that match a set of requirements, like withdrawals over $5,000 in the last month.

Do you subscribe to emails full of curated content? Marketing teams use SQL to analyze the data for insights into which content their readers enjoy most.

JavaScript and Java have almost nothing in common. Java was developed by James Gosling in 1995 with the original purpose of designing a language for digital devices such as set-top boxes and televisions. But it happened to be too advanced for cable television of that time.

WHAT IS JAVA USED FOR?

Developing Android apps is probably the most popular use of Java. In fact, the Android operating system itself is written in Java.

Many game developers use it because they can get started without paying any licensing fees and because of the powerful 3D game engine, JMonkeyEngine. Games written in Java include Tetris, The Sims 3, Space Invaders, Street Fighter II, Contra and even Minecraft.

Java was originally designed to run on all types of hardware, making it one of the main programming languages used for the Internet of Things, or IoT.