EVERYTHING YOU WANTED TO KNOW ABOUT CHAIN LETTERS 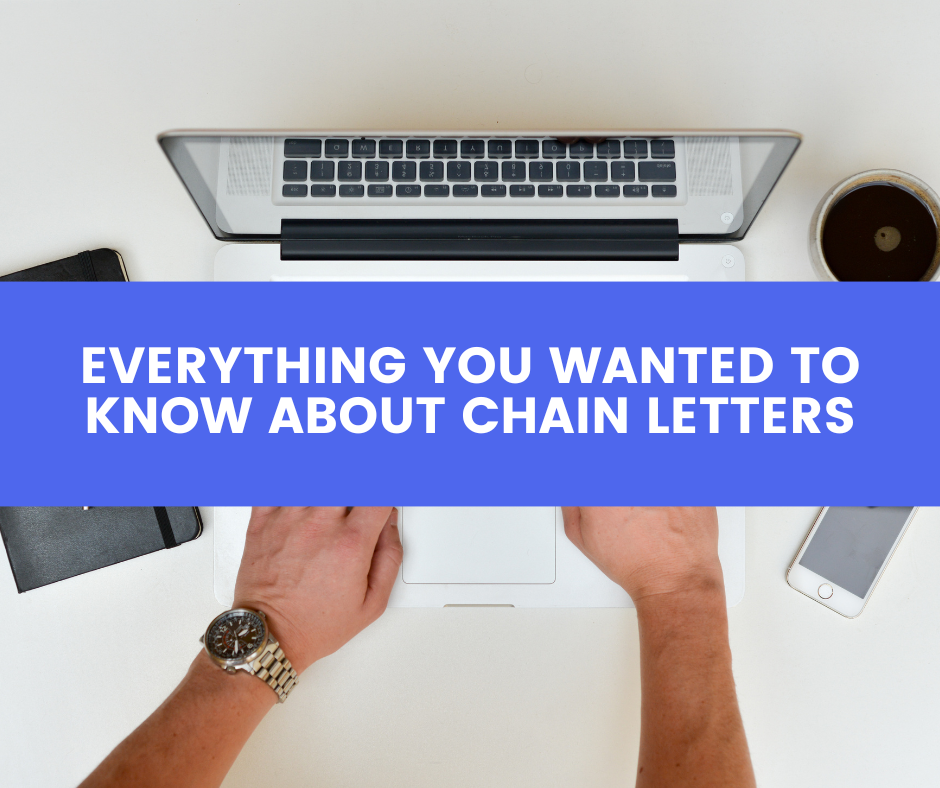 I am currently building a home on the West Coast of Florida, with a private pool, boat slip, and a beautiful view of the bay from my breakfast room table and patio. I will never have to work again. Today I am rich!!!  I have earned over $400,000.00 (Four Hundred Thousand Dollars) to date and will become a millionaire within 4 or 5 months. Anyone can do the same. *

* A fragment of an original "Make Money Fast" letter written around 1988 by a person who used the name Dave Rhodes.

It is believed that the pioneer of chain letters is Dave Rhodes, who in 1988 attacked the users of Usenet (the prototype of modern Internet) with his letter, preserved in history under the name “Make Money Fast”. Currently, there is no information about the personality of "Dave Rhodes", but, according to legend, he was a student at Columbia Union College, an educational institution of the Seventh-day Adventist Church in Maryland, who decided to improve his own financial situation in such an intriguing way.

In his letter, "Dave" proposed a classic pyramid scheme: the text contained a list of names and addresses of people, to whom you should send as much as one dollar. The “Make Money Fast” system was quite easy to follow. After sending the money, you should replace the bottom name and address with your own and send the “letter of happiness” further to as many people as possible. Various texts of the "Dave Rhodes" letter with the same message (“get rich with the help of a pyramid”) circulated on Usenet in abundance.

FAMOUS CASES AT THE DOWN OF CHAIN LETTERS

WHAT IS A CHAIN LETTER?

A “chain letter” is a letter aimed at making the recipient forward the message to his relatives and friends. Letters of this kind have existed since the nineteenth century. Their handwritten versions were sent among friends long before the Internet era. Just ask your mother.

Do you remember this letter from an African prince, who decided (in sake of getting closer to people, maybe) to offer you one million dollars? In exchange you only had to transfer him a few bucks. Pure formality. Let’s look at more examples of “chain letters”.

A fake story of a kid dying from cancer and raising money for an expensive operation.

Sign an online petition for a new progressive law or a great social cause. And submit some personal details.

A virus is circulating over the web, threatening to crash users’ operating systems. They urge you to strengthen your internet security by installing or deleting certain files on/from your system.

“Make money fast” pyramid schemes. Enroll more people into a scheme and get a reward.

You will have 7 years of bad luck/no sex/illness or even death if you refuse to forward the letter to 7 other people.

WHAT ARE THE 7 SIGNS OF A CHAIN LETTER?

Do you remember a warning on Facebook, distributed in waves, that soon the rules of the social network will change, and all your data will become the property of Facebook. Why was it so massive? The authors of this message use the techniques of social engineering. It was a typical chain letter, and here are its classic signs:

1) It is serious, and it concerns you personally. This is how your attention is captured.

3) The source is either not named or shady (“the Facebook administration has warned…”).

4) There is no clear date, time reference.

5) Of course, it is necessary to share a warning to others.

6) Sometimes you are asked not to use a regular repost (Share button), but to copy and paste the text into a new publication. Why? If you used the "share" function, it would be enough to block/hide such a post once, and new copies would not appear in your feed anymore. "Copy-paste" means new "chain letters" not related to each other. You will have to get rid of them one by one. In addition, the publications of friends are trusted more than the reposts of unknown sources.

7) If you contact the person who sent you the warning (or posted that he was asked to), it turns out that he or she was not personally affected. If you ask where the information came from, the answer will be “I got it from someone else”.

Do not share “chain letters”. They can get you or other people into various kinds of troubles. From intruding people's privacy with unwanted spam to online fraud, identity theft and computer virus infections.

If you are urged to share any information about a threat or public issue, take your time. Breathe in and re-read the message: are there signs of a chain letter?

Check the source and make your conclusions. For example, information on serious digital security threats can be shared in specialized expert communities or established media, not by anonymous letters.