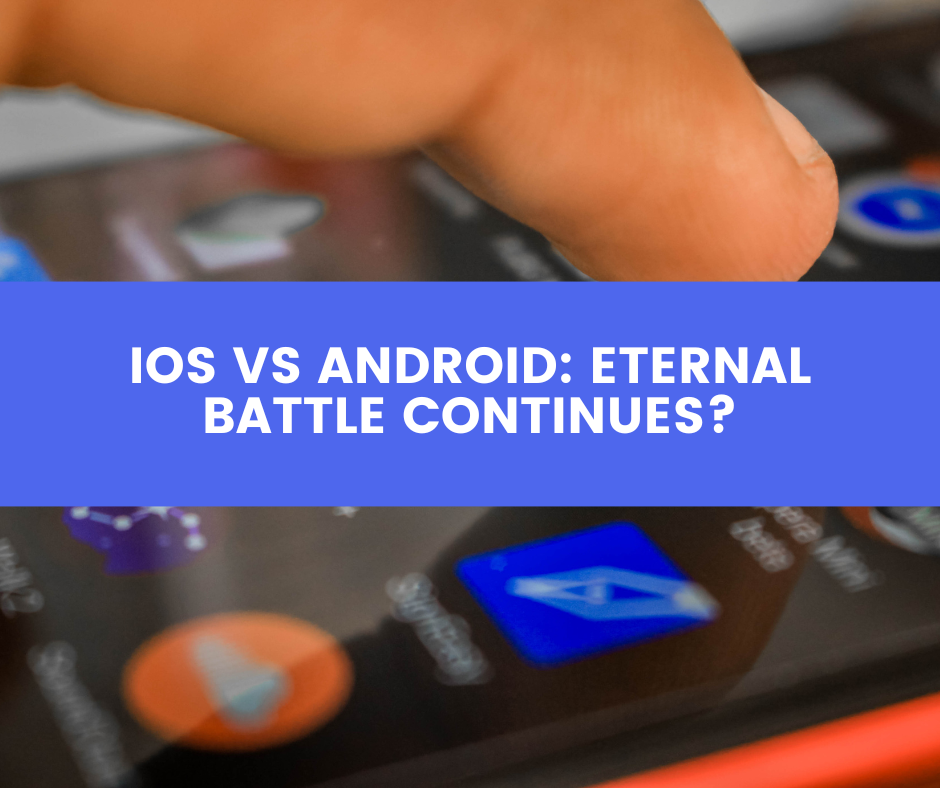 Since the era of the first smartphones running Android and iOS, there has been an ongoing debate about which operating system is better. Apple's OS offers better security, while Android is famous for its open system and more features. Their latest version — iOS 15 and Android 12 — are both excellent, but each in its own way. Some features overlap, but UI/UX look quite different. What system is better for us, customers? Let’s have a small comparison and find out.

In terms of design, it is safe to say that chaos reigns across Android OS. Not so long ago even app icons in Android were of different shapes. Lately, Google unified the icons design, but still offers a variety of shapes for users to choose from. For this reason, there are Androids with round icons, square icons, and some are of completely free shape with unguided logo design.

App icons on iOS have always had the same shape. All applications are neatly placed on the main screen with no awkwardly shaped icons standing out from others – everything is done in one style.

When it comes to navigating through a system, iOS is simpler and cleaner than Android - there are no additional settings that can get you lost in submenus.

The interface of both systems can be called similar, but the approach to installing new programs in the device is different. If Android is open for any user to install new software to suit their needs, all changes to iOS are strictly controlled. Often user has to work with existing Apple templates, which, however, are usually quite convenient and versatile.

iOS has simpler and easy-to-use controls, but the functionality is not as wide, while Android offers a wide variety of options for every taste, but it is not always obvious how to use them. Note that the prices for Android and iOS flagship smartphones are now approximately in the same segment.

Both Android and iOS are limited in their own way. Many enthusiasts are willing to change it. Rooting and jailbreaking have become popular ways to break out of manufacturer limits. Tech-savvy users install their own software or modify the existing one.

Today’s iOS, in its original non-hacked state, is more limited than Android, that offers quite flexible settings to its end users. Some experts believe that iOS can now be unconditionally attractive only to loyal users who are accustomed to this operating system and have not tried anything else.

“In terms of customization, widgets and various options, Android is a cut above. Almost everything new that appears on iOS is copied from Android. Android can be like iOS, but iOS can't be like Android. iOS has many limitations that are simply impossible to get around. Recently in courts all around the world, Apple was de facto forced to abandon these restrictions,” – mobile expert noted.

Apple fans and even some Android smartphone owners often admit that Google's operating system is less stable than iOS. As an excuse, you can point out that Google is faced with the task of creating an OS that is optimized for thousands of different smartphones, while iOS only works on the iPhone. Moreover, Apple releases both hardware and software, resulting in near-perfect optimization.

iOS is also a lighter operating system despite being relatively feature rich. iPhone tends to have less RAM compared to competing Android models, and it also requires less resources due to good optimization.

In terms of updates, both operating systems have security patches released quickly. But as only a dozen current smartphone models work on iOS, and thousands on Android, it is more difficult to support all the devices smoothly and seamlessly. Therefore, it is easier to keep iOS gadgets up to date.

Have you noticed that even older iPhone models like SE or 6S Plus work great on the latest versions of the operating system?

On iOS, you can't download apps from third-party sources – they are only available at the App Store. Android smartphones are not restricted by their official Play Market store.

“Users who wish to download apps from unknown sources should choose Android. For Apple, it is like driving a car without airbags and seat belts. Apple's mission is to maximize user security and privacy. Allowing apps to be installed from external sources is too risky,” says Apple CEO Tim Cook.

The Android smartphone market offers an immensely wide choice – from the most budget friendly to premium models in all forms and shapes. Apple has a single type of form factor.

Moreover, Android is an American software (made by Google), that can be installed to a range of devices from South Korean, Japanese, Chinese, American, and even partially Russian manufacturers. iOS is developed only for Apple products. And Cupertino company releases new smartphones not that often – hopefully, once a year.

So, from the hardware point of view, Android smartphones are more interesting –they offer greater variety in all price segments, more memory and more features.

So, iOS or Android: what should you choose? Both systems have pros and cons, and, as with many decisions in life, your choice will greatly depend on your personal preferences.

Owning an Apple product is a more convenient and subjectively more pleasant experience. Let’s be honest, iPhone is still the most popular and prestigious brand of smartphones, MacBook is still the most solid option and obvious choice among mass-market laptops.

Android-device ownership is a bit trickier and more liberating at the same time. It gives you the choice — how much you want to spend, what hardware and software features you need, how you want to organize and personalize your mobile experience. The relative lack of high-quality apps and accessories is the price to pay for that freedom.