7 DEADLY VIRUSES AND HOW YOU CAN GET THEM 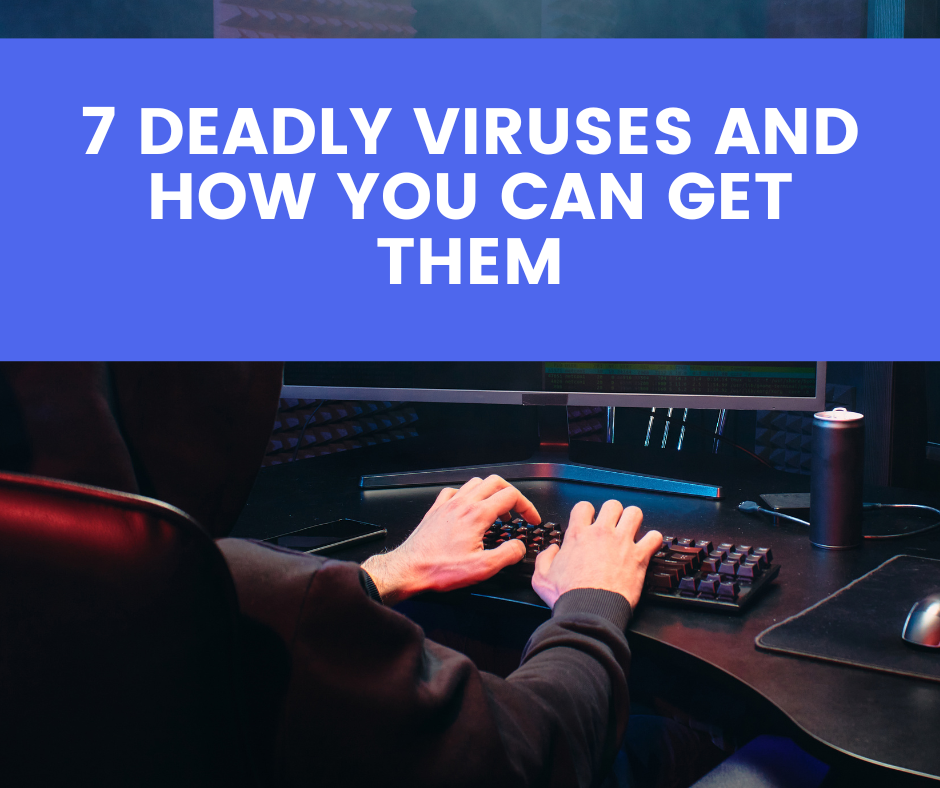 Just like a Coronavirus is dangerous for people, computer viruses are harmful for computers. Spreading across networks, they make copies of themselves on each computer they enter, without people even realizing it.

Let’s admit, it happened to all of us. In most cases, it is rather an inconvenience that can be solved by cleanup and antivirus installation. However, some viruses can cause a lot of damage, for example by irreversibly turning your computer into a very expensive brick.

WHAT IS A COMPUTER VIRUS?

In a nutshell, a computer virus is a piece of executable code that spreads itself by clinging to a file that is meant to be opened, like batch files and shell script files. Once you run them, your machine is infected.

HOW DOES A COMPUTER GET A VIRUS?

Yes, it is still the most common way of getting a virus. It is either an attachment or a link that you click that gets your system infected. If you receive lots of emails from your colleagues or friends, you should be extra cautious.

Solution: one way to prevent it is always looking at the sender’s email address. For example, if it looks like ‘AppleSupport121@outlook.com ‘, you can guess that it has nothing to do with Apple and delete the letter straight away. And please don’t hurry up to open an attachment, you can be a click away from the virus.

Another common way of getting a virus is downloading unlicensed software from untrusted sources.

Solution: the best way to download a program is the official app store for your OS. In order to meet the store’s security guidelines, they always test the software against viruses. Another thing you can do is spend a couple of minutes looking through app reviews. The lack of reviews should be a warning sign for you.

Yes, you can get infected simply browsing the Internet. Nowadays criminals know how to use online ads for their fraudulent activities. It is called malvertising. By clicking on these ads, you can install both viruses and malicious software on your computer.

Solution: enable an ad-blocking extension on your browser. If there are ads that you want to see, you can always turn it off.  You can also use specialized scanning software for your web activities.

7 WORST COMPUTER VIRUSES OF ALL TIME

October, 2001. Designed in Microsoft Visual C++, Klez was a sophisticated computer worm that can be characterized as “mass-mailer”. Once making it to your system, it sends itself to a random selection of addresses from your Outlook address book. Klez arrives in e-mails with various hard-to-track subject lines and turns your computer into the “from” address, while you are checking the Inbox.

April, 2004. This virus used vulnerabilities of Microsoft Windows XP and Windows 2000. Sasser's superpower was the ability to spread without any human action or a user’s click.  Can you guess who has been hit? Great Britain’s Maritime and Coastguard Agency and Taiwan’s postal service happened to become Sasser biggest targets.

It all happened in 2000 when Windows users started receiving emails with “I love you” subject. In just about 10 days, 45 million cases were detected.

Forbes says that the Pentagon, the CIA, and the U.K. Parliament turned off their email systems for several hours as a result of the incident. It is believed that the fraudulent code was created to steal passwords.

Interesting fact. Whereas today’s viruses are launched for illegal profit, Conficker was created with another goal – to infect as many computers as possible. Ambitious, isn’t it?

August, 2012. Shamoon hits 32-bit Microsoft Windows. This powerful virus has been deployed in some of the most impressive cyberattacks of all time. Among the victims were mainly oil and gas enterprises: Italian company called Saipem, Saudi Aramco and RasGas Company Limited in the Middle East. As the result of the attacks, more than 300 computers stopped operating at once.

Nimda was spotted in September of 2001 and classified as a mass-mailing virus with various spreading tactics. Utilizing vulnerabilities of Microsoft’s IIS web server Nimda spreads both through email attachments and websites. Among Nimda victims are tech giants Microsoft and Dell. Interesting fact: the name of the virus is a reversed “admin” word. Was it a hint?

Though not as harmful as the rest, this is one of the few viruses showed that Macs are vulnerable too. Flashback was launched in 2001 as a fake Flash install. As a result, 600,000 Macs were affected, including 274 Macs in the headquarters of Apple.

Computer viruses are out there in the wild and are still the greatest threat to every contemporary business. Even our personal devices are under threat, as today's cybercrime's most actual agenda is to steal personal data. So, as a user, do not forget to update your system and follow the simple security rules mentioned above. As a company, please contact trusted professionals to run timely check-ups and eliminate software flaws.